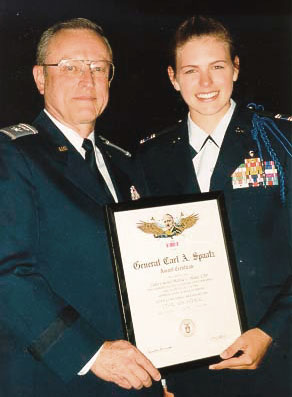 CAP National Commander Brig Gen James C. Bobick presented Spaatz Award #1423 to Colorado Wing’s C/Col Melissa Bland in recent ceremonies. General Bobick noted in his remarks that C/Col Bland is the only cadet to whom he has presented all four CAP milestone awards: the Billy Mitchell Award, the Amelia Earhart Award, the Ira C. Eaker Award and the Carl A. Spaatz Award. C/Col Bland joined CAP in November, 1995. She is seeking a nomination in either the U.S. Air Force Academy or the U.S. Naval Academy and hopes to become a fighter pilot. She is currently a high school senior in the Denver area. Both of C/Col Bland’s parents are pilots; her mother flies Boeing 767s for United Air Lines.