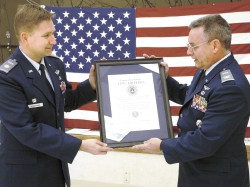 Andreas is a 1991 graduate of the Air Force Academy and serves as an active-duty HC-130 pilot stationed at nearby Moody AFB. His sons Matt, Jordan and Jared are all cadets and charter members of the new squadron. 5 July 2005