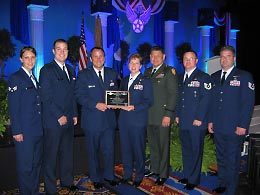 The award recognized the 26 members of “Crew 3” for sustained aerial support in the E-8C while assigned to 379th Expeditionary Operations Group, flying in Operation Iraqi Freedom from October 2004 to February 2005. Crew 3 flew 28 combat missions and provided command and control, intelligence, surveillance and reconnaissance to the Combined Air Operations Center, and to Army and Marine ground commanders. Crew 3 members were lauded for their “airmanship, courage and leadership under combat conditions. Flying more than 185 hours in hostile skies, they played a vital role in protecting convoy operations on supply routes and provided threat warning to more than 1,500 convoy movements. They also provided critical information for offensive combat operations to kill, capture and deny sanctuary to anti-coalition forces. The crew’s situational awareness helped prevent friendly forces from otherwise undetected enemy engagement. Their decisiveness saved countless Army, Marine and coalition forces’ lives during enemy contact. Through Joint STARS assistance, combat medical evacuation time was reduced from hours to minutes from the initial distress call. “We were a crew of a truly ‘total force’ nature with active-duty Air Force, Army and Air National Guard members,” Lt Col Omstead said. “Each and every individual was a true warrior. Everyone understood the big picture: we were deployed to fight for freedoms that so many people take for granted. It’s good to have such an outstanding crew recognized for their hard work and dedication.”