Home / The Awards / Cadet Certificate of...

In August 2007 the Board of Directors and membership of The Spaatz Association approved the creation of a new class of membership–the COP Membership.   This membership category is in recognition of, and limited to, former CAP Cadets who completed the early CAP Cadet Program and earned its capstone award–the Cadet Certificate of Proficiency.

According to CAP historical documents, the COP was established in December of 1954 with an award ribbon authorized in August of 1956.  In June of 1957, CAPM 50-2 further defined that the 3rd bronze clasp for the COP Ribbon indicated satisfactory completion of achievement nine of Phase III in the cadet training program.  This represented the capstone Cadet Program award then in effect. Click here for more information on the award.

The COP was rescinded in March of 1964 with the introduction of the modern day cadet program and the General Carl A. Spaatz Award and Colonel Frank Borman Falcon Award as its capstone achievements.

COP Membership is a non-voting membership category.  COP Members may participate in all Association meetings and events, but may not vote nor run for elective office.

To join The Spaatz Association as a COP Member, see the Membership page.

The COP Master List is an ongoing project.  More than 36,000 awards were earned, but we’ve been told that most records were lost in a fire at CAP National Headquarters.  We are attempting to rebuild the list from historical records and member reports.

To get on the list, simply contact us, and we will add you during the next update. 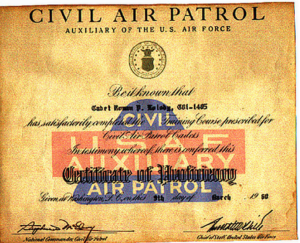 4 comments to “Cadet Certificate of Proficiency”