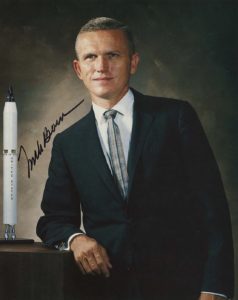 Earning the General Carl A. Spaatz Award was the payoff for years of toil in the CAP Cadet Program.  Only after the final hurdle, a daunting battery of tests–objective, subjective, and physical–was one “pinned” with the coveted triple diamonds of a Cadet Colonel.

The other Spaatz Award elements (the certificate, and, at one time, a nifty little special ID card) were usually awarded later with as much pomp and circumstance as CAP Regulations and local policy would allow.

Those who earned the award will always remember the extra “weight” those little diamonds put on the shoulders, literally and figuratively.

“Now what to do?”  Each Spaatzen faced the same challenge.

The prospect of a brief reign from this pinnacle of accomplishment was some comfort. However, as the final year of a cadet career wound down, the idea of a “demotion” from the cadet ranks could seem a dismal prospect indeed.

Imagine the thought, however fleeting, that your Civil Air Patrol career had somehow peaked….

Some left the cadet ranks for a prestigious appointment to a Service Academy or to progress into an advanced ROTC program (with a scholarship). These were worthy personal accomplishments built on the solid foundations achieved in the Cadet Program.

These events seemed to demand additional recognition, or at least a consolation prize.

The Falcon Award occupies a unique niche in the evolution of the Cadet Program. Like the Spaatz Award, it was a numbered. Further, the path to the Falcon Award first required the recipient to have a Spaatz Award, then take additional steps to demonstrate: “…dedication to the principles of freedom and the maintenance of the Nation’s aerospace leadership.”

This page is about the history of the award, from its beginning in 1964 to its rescission in 1979.  It is also intended to preserve a record of this legacy for the Spaatzen who were proud to earn the Colonel Frank Borman Falcon Award.

Chronology of the Falcon Award

In December 1963, the Civil Air Patrol News outlined the “New Cadet Program.”  The 15 progressive achievements, named after CAP and aerospace pioneers, were designed to be accomplished in four distinct phases. The program became mandatory for all cadet units on 1 July 1964.

Phase I – The Orientation Phase:

Successful completion of this phase resulted in promotion to Cadet Basic.

This phase included six achievements to be accomplished in any order as a cadet advanced through the cadet enlisted and NCO grades.  Successful completion of Phase II, plus attendance at a summer encampment entitled the cadet to the General Billy Mitchell Award, the CAP Certificate of Proficiency, and promotion to Cadet Master Sergeant.

Completion of all achievements in Phases I, II, and III, plus other requirements outlined in CAPM 50-6 earned the General Carl A. Spaatz award. This honor was tightly controlled–tests were administered by National Headquarters–and resulted in numbered awards for recipients.

Phase IV was dubbed the “final phase of the new program.”  Satisfactory completion of this phase earned the cadet the Falcon Award, designated as the highest award given in the Cadet Program.

Evolution of the Falcon Award

This award is given only to those Cadets who have achieved the highest accomplishments possible within the Cadet Program and have taken subsequent steps to become a dynamic American and Aerospace leader. This award is authorized only by National Headquarters and is given to those Cadets who have completed all of the requirements specified in CAPM 50-6, achieved the Spaatz Award, served in the Cadet Honor Cadre, and accomplished at least one of the following:

CAPR 39-4 (dated 6 September 1971) offered one new observation, that “…both members and non-members are eligible for this award.”  This was also the first time that the award was identified as the Frank Borman Falcon Award in honor of Colonel Frank Borman, former CAP cadet, astronaut, and command pilot of Gemini VII and Apollo VIII.

It further clarified the policy of eligibility by “…by both members and non-members” stating that:

This is the only achievement award in Civil Air Patrol which can be awarded even though the recipient might no longer be a CAP member. For example, if a cadet drops his membership when he enters the Air Force Academy, he would still qualify for the award upon application to National Headquarters.

There was also the new requirement that former Cadets joining the Senior Program had to serve at least one year as a member.

Monthly Bulletin Number 12 (dated 4 December 1973) detailed the expansion of the eligibility for the Frank Borman Falcon Award.  Specifically, the requirement for successful completion at the Air Force Academy was extended to the other Service Academies.  The requirements for successful entry into advanced Air FOrce ROTC was expanded to include the advanced ROTC programs of the other Service branches.

The December 1978 National Executive Committee (NEC) decided to delete the Frank Borman Falcon Award on 1 July 1979.  For some time the award had not exactly fit either the Cadet Program or the Senior Member Program. The award was given only to Spaatz Award winners–the highest cadet award. It was not exclusively tied to active achievement in CAP. The NEC pointed out that as a result of their decision, the Spaatz Award would truly be the top Cadet award. However, present recipients of the Falcon Award may continue to wear the ribbon during their service to the Civil Air Patrol.  (CAP News, February 1979)

(Excerpted form a letter sent to the author in response to a phone interview with Mr. John V. “Jack” Sorenson, the “Father of the Modern Cadet Program” shortly before his death in 1998.)

The Falcon Award of Civil Air Patrol is faint in my memory.  The reason is that the award was considered at headquarters as a post-cadet program item. Therefore, it did not come under my direct supervision. As I recall the Falcon Award, it was designed to do two tings: (1) to establish a bridge between the successful cadet, a Spaatz Award winner, and Senior Membership in CAP; and (2) to provide for a continuance of that successfully cadet in the program that meant so much to them.  My staff did the artwork and wrote much of the corporate documents that established the award.  However, it really was a Senior Member initiative.